Anime, the Future And the Supernatural + Painting "Specter" 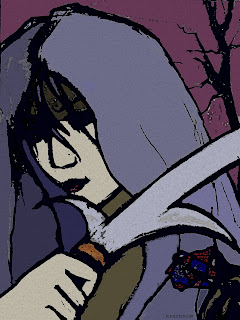 From the beginning, anime and manga have explored many themes, two of which I find particularly interesting, the future and the supernatural. Dr. Tezuka's Astroboy and the proceeding giant robots set the stage for the former, the crow spirits in his manga "Dove! Fly Up to Heaven" and numerous other spirit creatures out of Japanese folklore. the latter.

Many anime bring the two together in ways ranging from comedy to horror. The numerous series about Tenchi Muyo and friends were all about the future and the supernatural, not to mention love found, love lost, friendship, lonliness and a few other subplots thrown in for good measure mostly with comedic overtones. Throw in a good dose of violence and you can say the same for Cowboy Bebop, Outlaw Star and many others.

A completely differnent take on the future is explored in anime like the Macross series with a computer generated, holographic pop singer, Sharon Apple, and the implications involving artificial intelligence. Can A.I. be taken too far? Can A.I. beings take over and controll their creators?

Anime and manga have envisioned the future in ways both comedic and tradgic, idylylic and apocalyptic. Appleseed followed by Akira then Ghost in the Shell complicated the concept further by adding government control, A.I., cyborgs and the enevitable revolt of the oppressed into the mix.

One of my personal favorite takes on the supernatural (and the future if you count flying saucers as belonging to the future) is a South Korean animation, Yobi, The Fivetailed Fox. Anime, of course has it's share of fox spirits. Kagome's friend and Inu Yasha's tormentor, Shippo for example. Even intelligent life that has no specific shape, form or appearance and a seeming time traveller that can communicate with them are standard fare for anime (Mushi-shi).

Just like anime's take on the future, the supernatural is portrayed in ways from lighthearted to serious, comedic to an all out battle between good and evil. Anime and manga very seldom narrow their focus to just a simple subject matter or storyline. More often than not , it is complex, over the top and taken to the extreme. Somewhat like the real, present day world of Japan.

Randy Patton
www.budurl.com/RandyPattonArt
Posted by Cynthia's Blog at 4:20 AM No comments:

The Evoltion of Anime and Fine Art 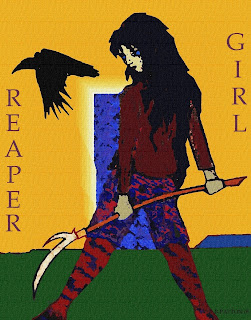 An artist named Takashi Murakami has been creating art in the form of paintings, statues, prints,toys and just about anything else he can put is images on to market. Murakami is the prominent name in the world of fine art that draws it's inspiration from anime and
manga.

Murakami was influenced by anime from the 1970s and 1980s and used the look and feel of anime in his work as opposed to what might be a much more traditional source of inspiration for Japanese artists, the classic woodblock print. Murakami attended the Tokyo National University of Fine Arts and Music and majored in Japanese art.

Soon therafter the Poku concept was born, a phrase created by Murakami to describe the blending of pop culture references he percieved in America and Japan. Technology, video games, movies, television, including commercials, are some of the sources of his influence for his creations.

Dob, i.e. a futuristic, android Mickey Mouse is a Murakami invention that straddles the line of art and commercialization just like Mickey did from the early 1930's to the present. Murakami learned from the master himself, Mr. Disney of course.

The Superflat movement, Murakami's name for his two-dimensional style as well as a comment on otaku culture, media and Japanese culture in general evovled out of Poku, Dob as well as his statues and even an animated short film. Fashion, Louis Vuitton for example, as well as keychains and magnets, balloons and toys all comprise the world of Murakami's pop art and merchandising world.

Murakami's show at the MOCA Los Angeles, with it's Warholian atmosphere solidified his place in the world of post-modern contemporary art. Irony at it's best for the leading critic of the "superflat" society to succeed using the same concept of art he so derided.

Fine art inspired by animation and comics is nothing new. Roy Liechtenstein, Andy Warhol and many others have been influenced by comics.

Now Range Murata, Yoshitoshi Abe and Hayao Miyazaki as well as many other anime and manga artists define the concept of anime as fine art.